My Top 10 Favorite Things to Eat in the Dominican Republic.

My Top 10 Favorite Things to Eat in the Dominican Republic.

I will begin by saying everyone’s tastes are different…

So you may very well look at some of my choices and respond no way are you serious??

This is normal and was the same for me until I opened my mind and my stomach to new possibilities.

My twin boys (14 at that time) who accompanied me here in 2011, had some real challenges as well in relation to finding foods they would eat?

But budgets and desires didn’t usually agree during those initial years.  It did however present some interesting lunch and dinner conversations to say the least.  We did a tremendous amount of experimenting through trial and error, which eventually formed our top 10 list. 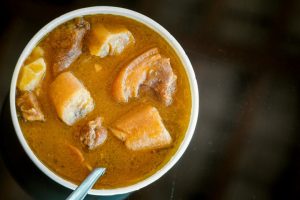 This rich stew is commonly made up of different meats including beef, pork, goat, chicken; alongside plantain, yams, pumpkins, and other roots. It is usually served with a side of white rice and avocado. I add some hot sauce to spice it up a bit more. As an African gift to the continent, many Latin American countries have their own version of Sancocho, but be assured that Dominican sancocho, and its thick broth and seasoning, is truly like no other.

You can find great Sancocho almost anywhere on the island, especially in chilly mountain towns (such as Jarabacoa). The more authentic versions are made in the local comedores, typical restaurants, or a kind neighbor’s house.  Many are eager to share their meals to obtain your opinion on how good it is!!

Finding this recipe was a godsend and it didn’t take long for it to become a mainstay in our meal planning. 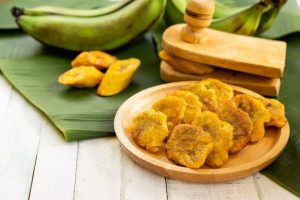 These fried plantains are a popular staple on the island. Tostones are usually eaten as a side to many dishes, or on their own. Frying them is just one of the many ways you can cook plantains and they can be served for breakfast, lunch, or dinner.

Plantains were originally brought to the island from Africa (by way of Southeast Asia) during the colonization period and have been an essential part of Dominican cuisine ever since.

The most traditional way to eat them? With some fried Dominican salami and a chilled beer. You can find a plate of tostones practically anywhere on the island from your local comedor (local deli/diner) including upscale restaurants. 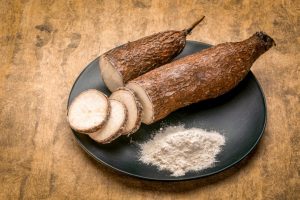 Yuca is the root of the cassava plant and even though it’s relatively underrated in Western cultures, it is actually a popular staple for millions of people around the world from Nigeria to the Dominican Republic. You can’t visit DR and miss out on trying this crop which was deemed sacred enough to have its own deity for the indigenous Taino.

With a particular, nutty flavor, the yuca is a versatile and healthy ingredient that will satisfy your appetite and your taste buds during breakfast or dinner.  You can find the root crop at any supermarket and pretty much any hotel buffet, restaurant, or comedor. Eat it with salami, eggs, cheese, or with a dip.

Types of ways to Eat Yuca: 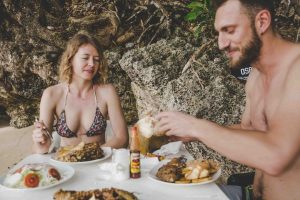 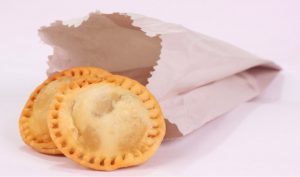 Two savory and inexpensive snack options to offer at a party, or to eat for a quick breakfast at the empanada vendors in the corner of pretty much any street anywhere in the country.

The difference between the two is that empanadas are the shape of the half moon, and pastelitos (pictured above) are round. It is also more common to find baked pastelitos and fried empanadas. Different restaurants, bakeries, and vendors get creative with the filling; you can find some with different kinds of meat, cheese, eggs, or vegetables.

Perfect finger food when you in rush or don’t want to fill up on food saving room for a cold beverage!! 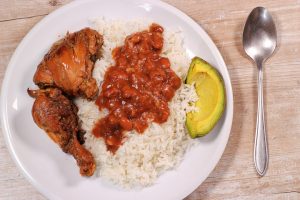 You can almost surely knock on the door of a Dominican family around lunchtime at any given day and the odds are that they’re having La Bandera.

This meal is made up of rice, beans, meat, salad with avocado, and sometimes a side of tostones or fried sweet plantains. Sounds like a lot? Well, it’s supposed to be a filling meal for the hardworking Dominican people.  The culture here is to eat a hearty meal during the day an take a fine siesta before returning to the laborious work that provides their livelihood.

La Bandera means ‘the flag’, which shows how popular this meal is in Dominican households. Moreover, the ingredients are a fusion of our cross-cultural criollo influences. Hence, why this plate is often referred to as “comida criolla“.

You can easily find La Bandera in your Dominican neighbor’s house, a comedor (local deli diner), or any restaurant that sells typical Dominican food.

7. Rice with Pigeon Peas and Coconut 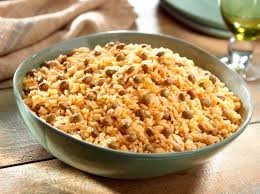 Experience the authentic flavors of the Dominican Republic with this Rice and Pigeon Peas with Coconut recipe (called Moro de Guandules con Coco in the Dominican Republic). Here, tender grains of extra-long rice are cooked with plump pigeon peas, traditional spices and creamy coconut milk for a rice dish that steals the show on the dinner table. Passed down through generations of Dominican cooks, this recipe captures the essence of the island. Key GOYA products make it easy for everyone to make at home.

Chimichurris is a Dominican hamburger characterized by the addition of numerous spices to the meat patty, such as oregano, garlic, parsley, and red pepper flakes. It is usually not prepared at home, but bought from street food vendors. Like most burgers, chimichurris is served in a bun and topped with a variety of ingredients such as mayonnaise, shredded cabbage, tomatoes, and onions.

This particular meal was a lifesaver during those early years with my twin boys!! 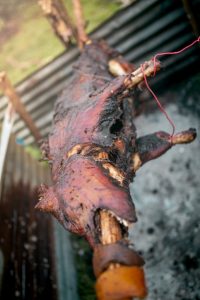 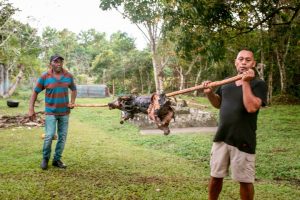 Last, and certainly not least, the roasted pig is a treasured staple during the most festive celebrations, especially for dinner on December 24th and 31st.

Since the very beginning, indigenous Tainos had enjoyed barbecuing their meat, including pork which was brought over by the Spanish colonizers. This cross-cultural tradition was passed down from generation to generation and is kept very much alive today. You will find the traditional roasted pig or ‘puerco asao’ in almost every Dominican table during the Christmas season. 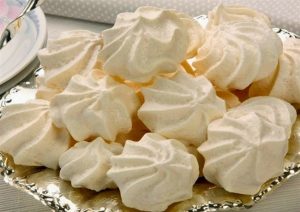 Suspiritos is one of the simplest Dominican desserts made with a combination of egg whites, lime juice, and powdered sugar. The name of this dessert can be translated as meringue kisses. When prepared, suspiritos are consumed immediately, and they are regularly served at birthdays and baby showers.
Apart from the basic version, there are also varieties prepared with chocolate, coffee, and vanilla.

What is your top 10 list of favorites is anyone’s guess?

But there is only one way to find out.

Experiment for yourself and create your own top 10 list.